Skip to Content
Home Jewelry Set Yourself Apart with Larimar

Terri Ramsey Beavers 20 Comments on Set Yourself Apart with Larimar

Found only in the Dominican Republic and thought by some to be the Blue Stone of Atlantis predicted by Edgar Cayce, Larimar continues to gather attention wherever it’s seen. That’s why anyone who really wants to stand out and gain attention for themselves seems to be wearing it. Larimar is more than just a beautiful stone, however; it has numerous spiritual and healing properties that have made it one of the most frequently sited and used stones in meditation as well.

The reason most jewelry doesn’t help make people stand out from the crowd the way that a statement piece does, is because the vast majority of it is mass-produced and mass-marketed in a way that tends to make it fairly ubiquitous. 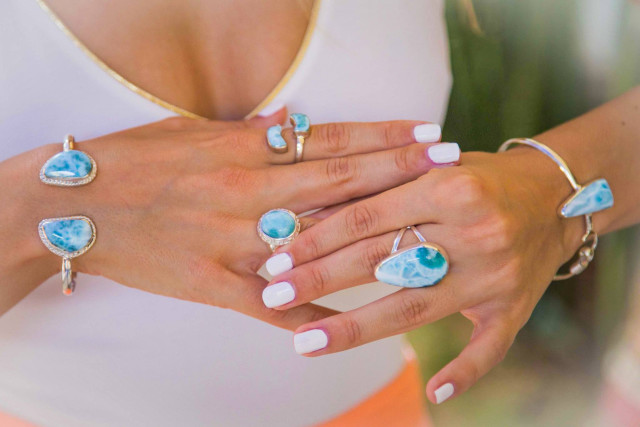 Larimar is different, however. This rare blue pectolite is found in only one mine in the world, so it’s never mass-produced and never mass-marketed. At the same time, each piece of Larimar is completely unique with a color that ranges from turquoise to clear blue and a translucency that can border or transparent at times. This makes Larimar unique in a world of gemstones that are more and more frequently being created in a lab.

Larimar is quickly gaining attention both for its beauty and for the handmade craftsmanship that goes into each bracelet, necklace, or ring. But it wasn’t just its looks that first caught people’s attention; it was its spiritual properties as well.

Larimar resonates deeply with both the throat and heart chakras. When meditated on, Larimar can help unlock communication, reduce stress, and release feelings of hurt and anger. These properties are particularly beneficial to pregnant women, who have found that wearing Larimar or keeping it nearby can help result in a healthy pregnancy, faster labor, and a reduction in the occurrence of post-partum depression.

In addition to being rare and never mass-marketed, Larimar jewelry is fundamentally unique in other ways as well. As previously mentioned, no two pieces of Larimar are ever exactly the same. The stone may range in color from light to dark blue, and from blue to green calling to mind both turquoise and aquamarine stones at times. Many Larimar gems also have a white vein running through them, while a few very rare pieces also show off a deep red streak or vein as well. The size and shape of each piece of Laura Bonetti fine Larimar jewelry also differs. In addition, Larimar has a unique fracture pattern as well as a triclinic crystal structure. This means that the artisans who work with Larimar may need to work with the stone telling them what it will look like, rather than them telling the stone.

All of this means that while each piece of Larimar jewelry is not only spiritual and beneficial to the wearer, it is always eye-catching and unique as well.

The Perfect Summer to Winter Accent

When you choose a gemstone to help set you apart from the crowd, it needs to be something that you can wear year round, regardless of your wardrobe or the season. There are few gemstones that can fit this category, but Larimar does. The stone’s surface has a cool, watery appearance that works well in heat of summer, while complementing most winter wardrobe palettes of blue, green, gray, black, cream, and white at the same time.

Stand Out with Larimar

Statement jewelry is one of the best ways you can set yourself apart from the fashion crowd. And with Larimar, you get even more; a spiritual and healing stone with a history and source that rivals its beauty. If you’re looking for a gemstone that can make a statement wherever you are, consider Larimar for the job.