I couldn’t stand it any longer, I had to start on my Christmas decorations. Yes, even before Thanksgiving. If it were up to me, I’d of started before Halloween so I think I did pretty good about being patient. Storage isn’t something I have a lot of so it’s easier to make Christmas decorations every year so I can throw them away after the holidays. That’s more practical for me as I like to change things up yearly. I do have my trusty favorite glittery ornaments that I keep but that’s all I keep.

Abby and Alyssa helped me make 2 batches of Cinnamon & Applesauce Heart Christmas Ornaments while they were out of school this past week. We also made paper Christmas trees, designed stockings, and put out a few decorations. It was a fun and exciting week for them and me. Tyler hid most of the time as he’s not a DIY kind of guy. I’m currently debating on a real tree or a metal one like the one I saw at Walmart. It’s going to come down to what I think will outlast my very bad cat who would have my pretty white tree from last year, laying on the floor. That’s why I’m not even dragging it out of the closet. So… at the moment, I’m treeless.

Back to my Cinnamon & Applesauce Heart Christmas Ornaments.

There are so many recipes on Pinterest for these heart decorations but all of them call for 1 cup of applesauce. That just didn’t work for us and the hearts cracked after baking and handling. They were pretty to start with but in no time at all, I knew I needed to change up the recipe. For the second batch, I added an extra 1/4 of a cup of applesauce to the recipe and it worked perfectly. They dried so pretty and I can’t wait to hang them on the tree. This is a Scratch’n’Sniff post BTW. 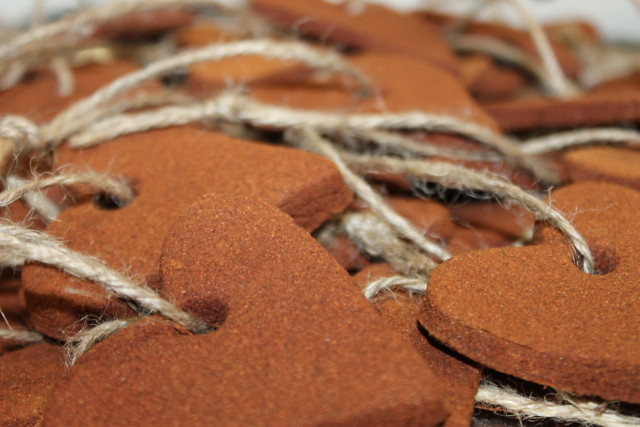 Gather all of your ingredients and let’s begin.

Get 2 rowdy kids to the table. Good luck if it’s pretty outside but once they sit down, they won’t want to stop. Trust me. If they look mischievous, it’s because they are. My little mini me’s. 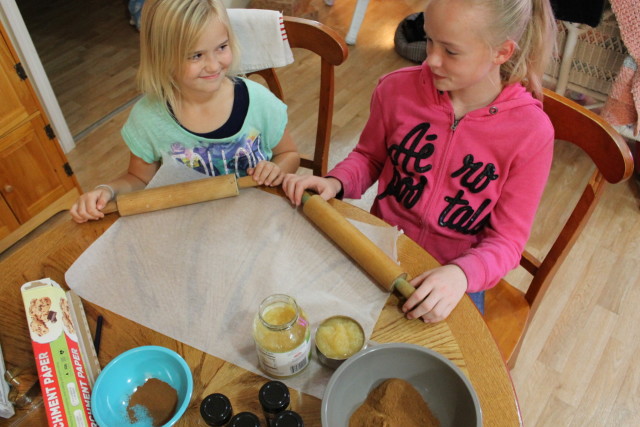 I let the girls pour the cinnamon and applesauce into the measuring cups and I took it from there. The reason being, the girls were fighting over who was going to mix it all up. Problem solved. I won that one.

I let the girls help themselves to the Parchment paper although I cut it myself. I’m a little overprotective.

I then made four balls from the dough (I know it’s not really dough but I don’t know what to call it) and gave 2 to each of the girls. The second batch made 6 small ones with the extra applesauce.

I let the girls sprinkle cinnamon all over their parchment paper and rolling pin. They have their own rolling pins and I’m not even allowed to use them. 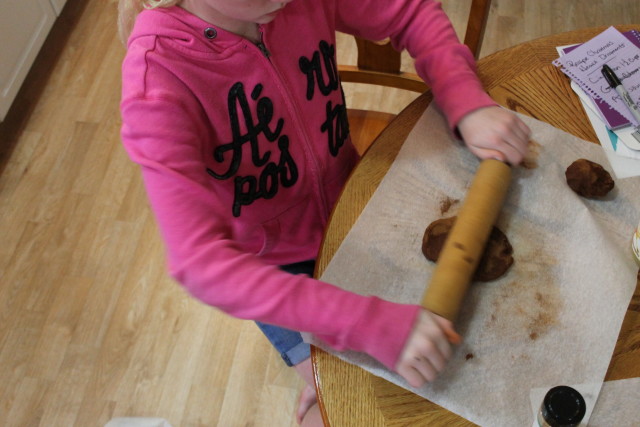 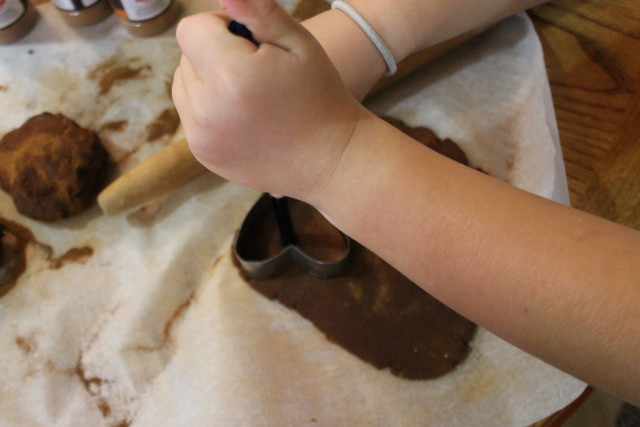 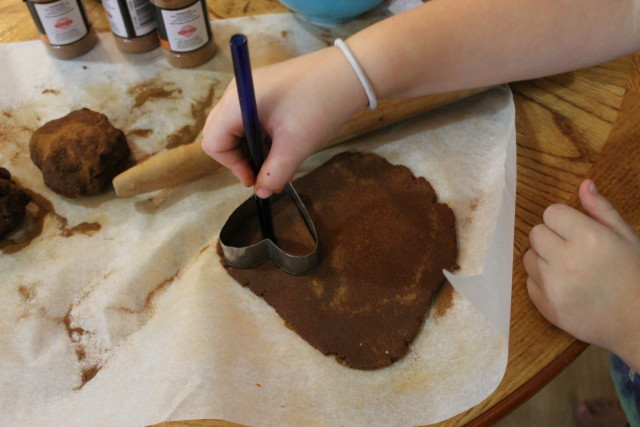 They used our heart cookie cutter to cut the shapes and used a glass straw to make the opening for the twine. A string would be pretty as well but I didn’t have any. I put a sheet of parchment paper on the cookie pan I planned to bake them on. 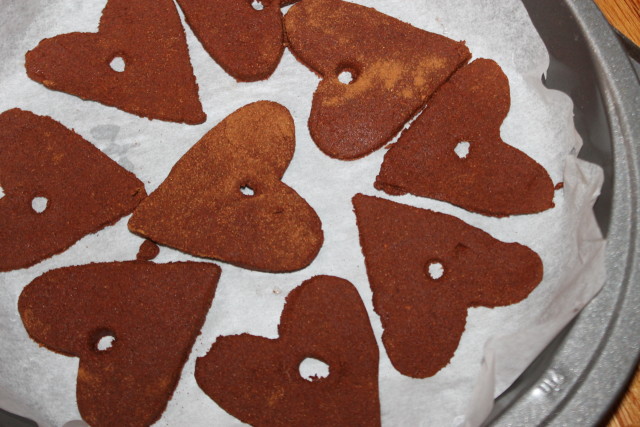 After they finished rolling, cutting, and poking holes in the hearts, we baked them at 200 degrees for an hour and a half. I kept them in the oven overnight to make sure they were really dried out well. After the hearts were good and dry, we applied twine to each one which we’ll use to add a hook too, to secure it to the tree. One of the girls applied more cinnamon to her rolling pin and parchment paper (Abby, she tends to go overboard) and it changed the color of hers a tad bit. I think the different shades make them that much more beautiful. 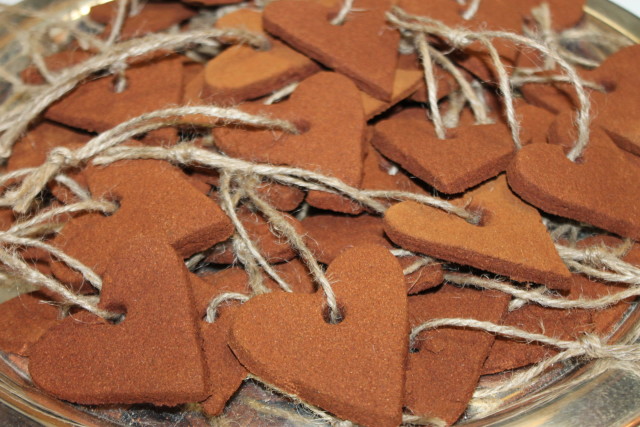 My cookie cutters were getting in bad shape because they’ve been used dozens and dozens of times, so I found this 12 piece set on Amazon for $3.08 and FREE shipping. If you use my link to make a purchase, I will receive a small commission. They come in a cheaply made package (who cares, they’re only 3 bucks) but they are made as well (if not better) as my more expensive set. 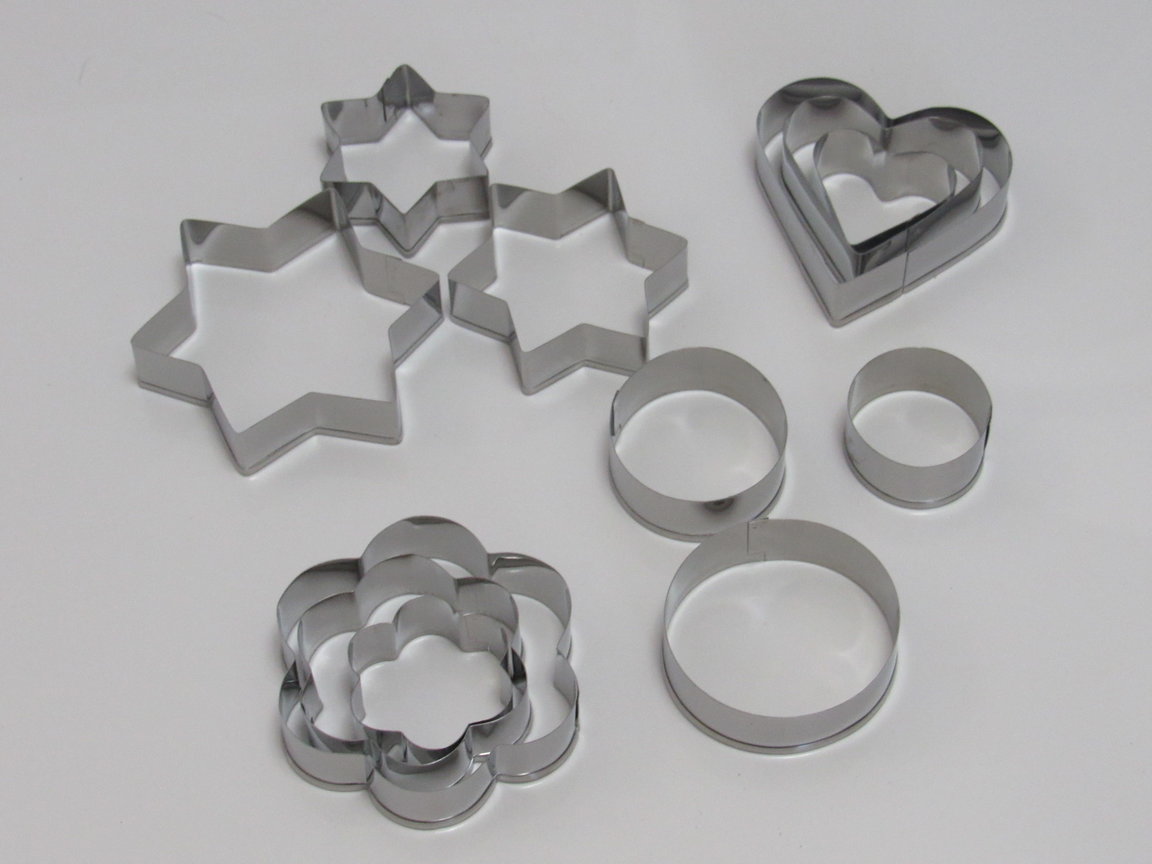 There you have it. Do you have any tips for us that you use to make your own DIY cinnamon & applesauce heart Christmas ornaments? 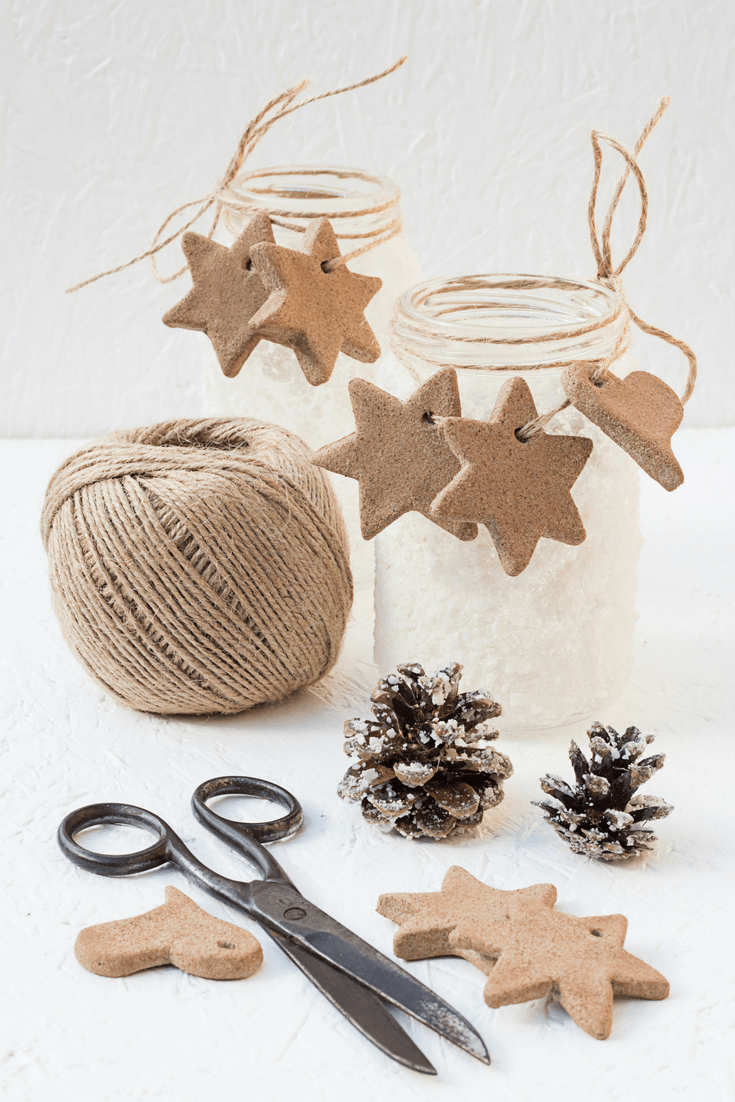 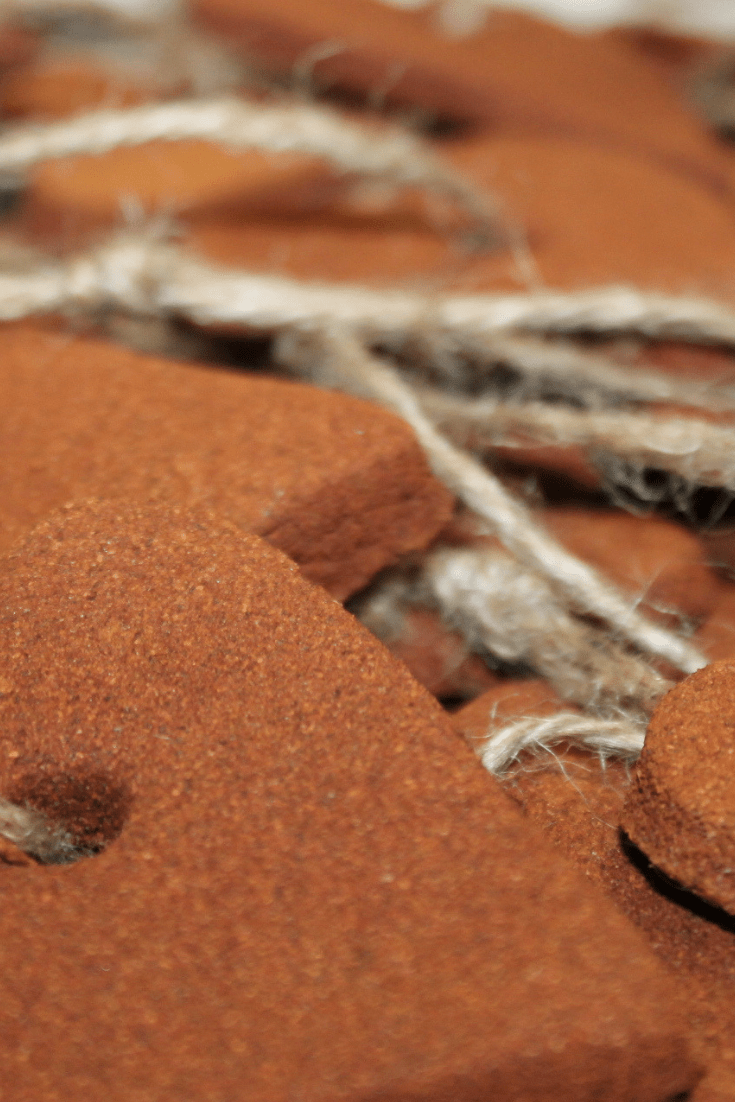